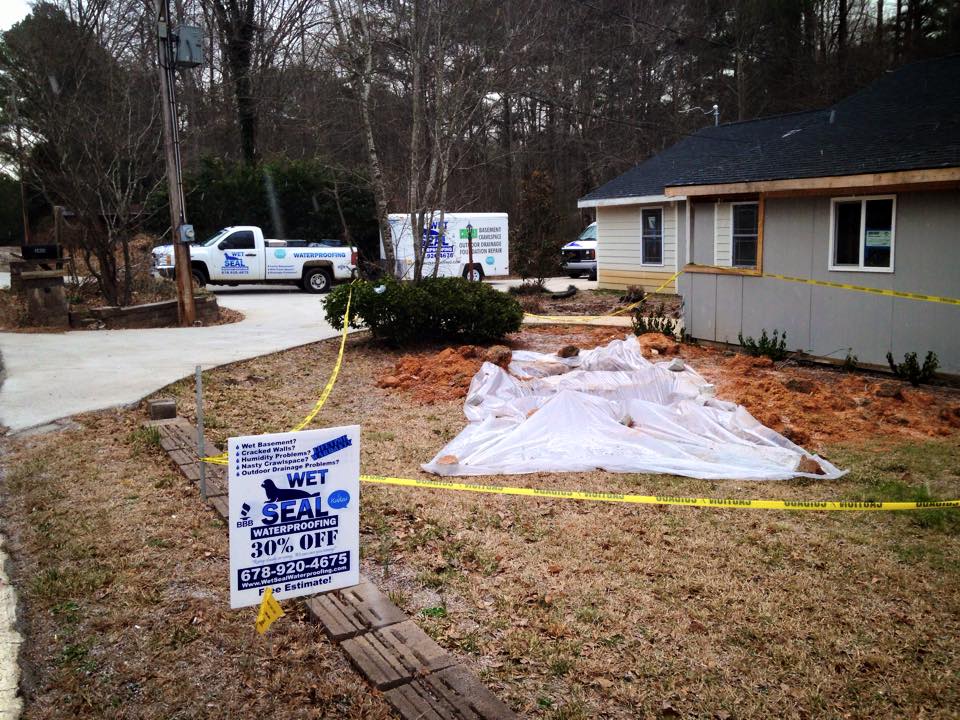 What is a foundation?

One type of foundation we see in a some Atlanta homes is a Slab Foundation.

The slab foundation or “Mono” foundation, is a foundation that surrounds the structure and is poured and connected to the footing. This is poured monolithically, meaning the slab is poured at the same time as the footing. Then the foundation walls are built on top of the newly poured concrete. This type of foundation is typically seen in older structures which were constructed to save time in installation. Although it can be installed rather quickly usually isn’t the most affective. The only way to waterproof these types of foundations is with a mono waterproofing system. This type of system is used to avoid any type of floor puncture to prevent any foundation interruption. A mono system is placed on top of the floor against the foundation wall, catching any seeping water at floor level.

Another type of Foundation we see in Atlanta homes are Pier Foundations.

These types of foundations are found in some residential homes that have pier footings. They are usually found in structures that do not have walls or only support the weight of a roof. Some examples where this would be used is on a front porch, decks, entrance ways, car ports, etc. and usually carry little weight. However in some cases there are walls built in-between columns that sit on piered foundations. These walls are called curtains, which do not carry any weight or load of a structure.

The most common type of foundations we find in Atlanta homes are a Wall Foundation.

A wall foundation is something we see a lot of. This is found when a thick footing is framed beneath the ground and reinforced with rebar. Then the concrete is poured usually with a high pressure cement, creating a solid smooth platform for the foundation walls to be built on. Once dried then the foundation walls are built on top of the freshly poured footing. With these types of structures a subfloor system may be installed. Waterproofing systems can usually be installed on either sides of the foundation depending on grade and can be installed without any concern of the structures weight.  The walls constructed on these types of foundations are usually a poured wall or cinderblock wall foundations.

The most common problems found in a cinder block wall foundation are bowed wall movement caused from lateral pressure. This is when the exterior soil next to the foundation wall becomes so great that the force of the soil pushes the cinder block inward. Hydrostatic pressure is at play here when rainwater becomes trapped next to the foundation and has nowhere to go. This can cause the wall to crack horizontally, not only letting exterior rain water in but bow the wall and in more severe cases can cause wall failure or collapse. To prevent these types of problems steal beams need to be installed every four to six feet to support the structure and prevent any further movement or wall failure.

Covering all of Georgia:

We service Atlanta Georgia and all of the surrounding areas.

A goal with out a plan is a wish. Here at Wet Seal we practice the five P’s. Proper planning prevents poor performances. We come to you with a complimentary inspection and deliver a permanent solution that is designed to work for many years to come.